Clan MacFarlane History according to The Stoddard Family

As printed in "The Stoddard Family being an account of some of the descendants of John Stodder of Hingham Massachusetts Colony" ... 1912

The name Mackfarlin is also spelled as MacFarlin, Macvarlo and MacFarlane. Not a clan in Scotland has a more interesting history than that of the Clan MacFarlane. Arrochar, at the head of Loch Long, in the highlands of Scotland, was the hereditary possession for 600 years of the chiefs of the clan. The descent of the clan from the ancient district in which their possessions were situated, is the only one, with the exception of the Clan Donnachie, which is fortified by a charter still extant.

As printed in "The clans of the Highlands of Scotland: an account of their annals, with delineations of their tartans, and family arms"... 1850

The origin of the surname of Macfarlane, but for a knowledge of the system of Gaelic nomenclature, would appear almost ridiculous to the majority of ordinary observers. The Mac is a simple matter, but how is Bartholomew to be changed into Farlane ? Certainly, the words look dissimilar to a striking degree; and yet, according to the best authorities, Farlane is nothing else than Bartholomew. Bartholomew came first, it is said, to be altered into Bartholom or Bartolan, whence came in time Parian, Pharlane, and, lastly, Farlane. This sort of progression in the spelling of a name is singular; and still it is the best account that can be procured in the case. Macbartholomew has really turned, in appearance, into Macfarlane, through the peculiar mode of utterance of the Gael. Be this as it may, the immediate origin of the Mncfarlnnu family is scarcely capable of doubt or question. They came from the great Lennox house—one planted originally-in the west of Scotland, and referred by various writers to a? early section of the western or Irish Celts. Be it observed that we allude to the first Lennox house, and not to the various lines of Stewarts, who successively obtained the old estates and honours, but whose latter inheritants have kept not a particle of them up to this day. They have been provided for otherwise, as " the destinies have decreed."The present Duke of Lennox (Richmond in England, and descended from a natural son of Charles II.) is not only the possessor of a noble paternal estate in the south, but is, through his mother, the lord of almost all the splendid properties of the Gordons, the " cocks," as they were long called, "of the North."

Clan MacFarlane History According to A History of the Scottish Highlands

As printed in "A History of the Scottish Highlands, Highland Clans, and Highland Regiments" 1875 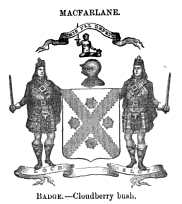 Of the clan Macfarlane, Mr Skene gives the best account, and We shall therefore take the liberty of availing ourselves of his researches. According to him, with the exception of the clan Donnachie, the clan Parian or PharlaN is the only one, the descent of Which from the ancient earls of the district where their possessions were situated, may be established by the authority of a charter. It appears, indeed, that the ancestor of this clan was Gilchrist, the brother of Maldowen or Malduin, the third Earl of Lennox. This is proved by a charter of Maldowen, still extant, by which he gives to his brother Gilchrist a grant " do terris de superior! Arrochar de Luss;" and these lands, which continued in possession of the clan until the death of the last chief, have at all times constituted their principal inheritance.