Mother used to almost draw a breath whenever she would say to me: "Oh, but it is a really nice tweed jacket."  As an adult, I now understand why she loved tweed so much.  A tough fabric, it does come in a variety of colors, albeit what I would deem muted in brilliance.  To date, I have never personally owned anything tweed.  But I know it when I see it.  It exudes quality and endurance.  It also usually comes with a higher price tag than I have felt my cheap old bones willing to pay.  But in all honesty, I have to also remember another statement from my Mother.  She would say that you get what you pay for.  "A $100 coat will likely last you 10 or more years.  At the cost of $10 per year, it is well worth the investment."

So, after yet another visit through a department store where I longingly ran my hands across a beautiful tweed jacket for myself, I've decided to educate myself on tweed.  I guess we can take that ride together.

There is a wonderful website that provides expert education in the simplest of manner (of which I am MOST appreciative), on a variety of topics.  So when I went looking for something on the internet, a Master class all about tweed, was something I just did not want to overlook.  The class about tweed is taught by Marc Jacobs, a well-known fashion designer.  You can review his succint lesson here:  TWEED.

So, in a nutshell, tweed appeared in the mid-eighteenth century.  We all know it comes from Ireland and Scotland.  But it was originally called "tweel."  Twell is the Scottish word for twill.  There appears to be a story that a bumbling Englishman misinterpreted "tweel" for "tweed" and the rest is... history.

Farmers were the first to wear tweed, but as usual, give a nobleman an idea, and they will run with it.  So after 1848, Prince Albertt purchased Balmoral Castle and designed a Balmoral tweed.  From there, it was fashionable for each estate to have their own tweed design.

Yes, tweed is really warm.  This is why we have actually purchased one for Steve.  We were in Scotland, and it was terribly cold.  He always insists on having his tweed jacket with us if we are going to the mountains.  But beyond a jacket or coat, you have likely seen the use of tweed in hats, bags, and of course, full suits for men and women.

Many years ago, I an certain that I saw a program discussing tweed, the weave of tweed, and a discussion about how the tweed is a match to the countryside and used as a sort of hunting camoflauge.  I've never seen that expressed anywhere again, so although I trust my PBS, I do have to wonder if this wasn't a convenient explanation.  The truth is, there are several recognizable tweed patterns.

2.  Donegal tweed - From Donegal, Ireland, this is deemed the most popular tweed with colorful specks and a knobby surface.

3.  Saxony tweed - Originally made in Saxony, Germany, it is a very soft tweed.  The wool comes from merino sheep.

4.  Herringbone tweed - The familiar weave with a pattern of V's.  It does look like fish bones, this the name.

5.  Shetland tweed - This tweed is from the Shetland Island sheep.  The Shetland Islands are off the northeast coast of Scotland.  This wool is lighter in color and weight, producing what is considered a casual tweed.

6.  Barleycorn tweed - (Never heard of it!). The weave has the appearance of barleycorn kernels on the surface of the fabric.  Slightly bumpy, the pattern is, per Marc Jacobs, "a dynamic pattern."

7.  Cheviot tweed - From the Cheviot sheep of the Scottish borders, this produces a rough and heavy tweed.

8.  Overcheck tweed - a plain fabric with a large checked design with contrasting colors. 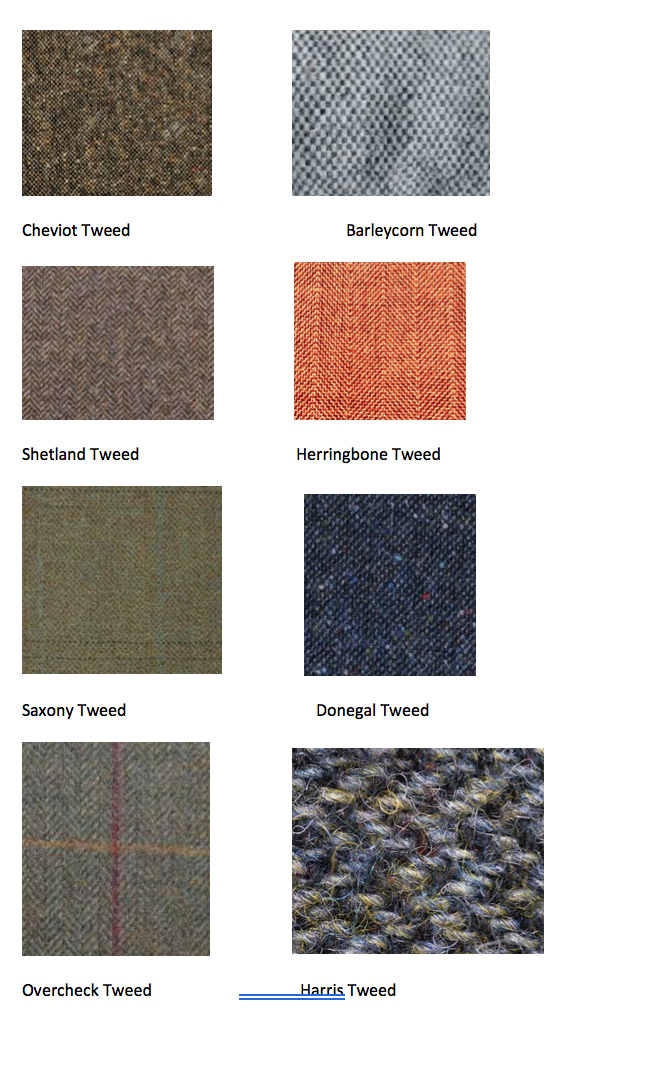